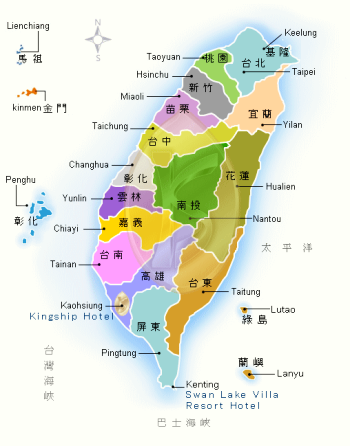 is rich in multiple cultures and people has long made a living upon ocean. The land area is only 0.01% of earth land but the population is the 46th among all the countries in the world. Many Taiwanese made efforts to improve “ human rights, democracy, peace, love, high technology, culture and arts” as the soft power of this unique island and created amazing miracles in economics, democracy and peaceful international relationship. Taiwan is a cross point of east and west culture, of continental and oceanic culture. The shape of Taiwan is like a long and narrow sweet potato from north to south. The area is 36,000 square km, and is located at south east side of Asia continent, among the arc of east Asia islands in the west side of the Pacific Ocean, with Japan in the north and the Philippine Islands in the south, a key position in Asia, and thus the transportation network is extended to all the directions, a convenient travelling place. Taiwan was called Formosa since the age of discovery. The folkways are sincere and honest, the weather is mild and quite constant most of the time, the mountains are harsh, high and beautiful and the whole island is surrounded by varied and complicated coastline. People in the island are active in religious and political activities, and also possess foresight in technology and concern about humanity and global ecology. The products made in Taiwan were to be sold in the whole world for the past 30 years, and thus Taiwan was listed as the 16th large trade country. Taiwanese are the major foreign capital among China and south east countries. Taiwan is rich in fauna and floral resource and humanism quality. The landscape is varied and complicated including mountains, hills, plains, basins, islands, rift valleys and coasts with sands or rocks. The Tropic of Cancer passed Chiayi that Taiwan possesses natural ecology of the tropical, subtropical and temperate zones. The proportion of native species and indigenous species is significan. It is about 20% of 18,400 species of wild animals on earth, such as Formosan Landlocked Salmon, Taiwan Rock─Monkey (Formosan macaque), Asiatic black bear and Swinhoe's Pheasant,etc. Taiwan values environment protection and technology, and takes up with energy saving and carbon dioxide deduction in the recent years. To protect and maintain the beauty of natural landscape and ecology, Taiwan established 7 National Parks and 13 National Scenic Areas.
You can visit Taiwan starting from Kaohsiung to feel the passion in southern Taiwan and then go to Kenting, reputed as Asia Hawaii, to experience the relaxation from the oceanic vacation atmosphere. Sun Moon Lake is like a shinny pearl among mountains, representing the most wonderful natural landscape of lakes and mountains! The Coastal Range and Rift Valley in the east, including Taroko of great momentum, and dangerously steep mountains and canyons, preserve the purest natural feature in eastern Taiwan. Taking the mountain-climbing rails in Alishan and shuttling among the forest to watch sun rise and a sea of clouds, or you may climb up the highest mountain in the north east Asia- Yushan, to observe the changeable scenes in varied seasons of the magnificent mountains. The offshore islands, Kinmen and Pengfu, are rich in local tradition and characters rooted from unique humanism and history. All of these invite you to visit Taiwan for an impressive tour! The people in Taiwan are honest, passionate, plain and diligent, and value ties of friendship. The cultivation and mixture from different provincial origins in hundreds years creates and breeds colorful treasures and vital humanisn quality in Taiwan, such as religion, architecture, language, customs and style of diets, demonstrates harmonious and yet multiple appearances. The most significant one is diets, such as cuisine of Taiwan, Hakka, Canton, Hunan, Szechuan, Japanese and Korea, or traditional small taste, local specialty, etc. all gathers and mixes in Taiwan to make this place an attractive cuisine kingdom.